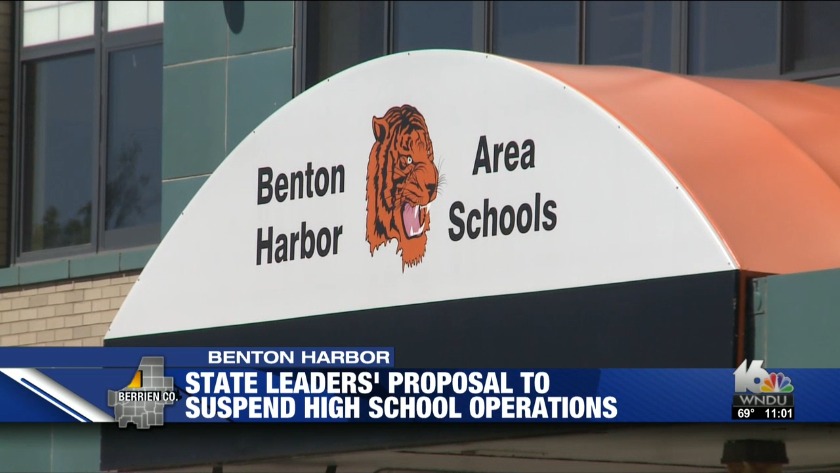 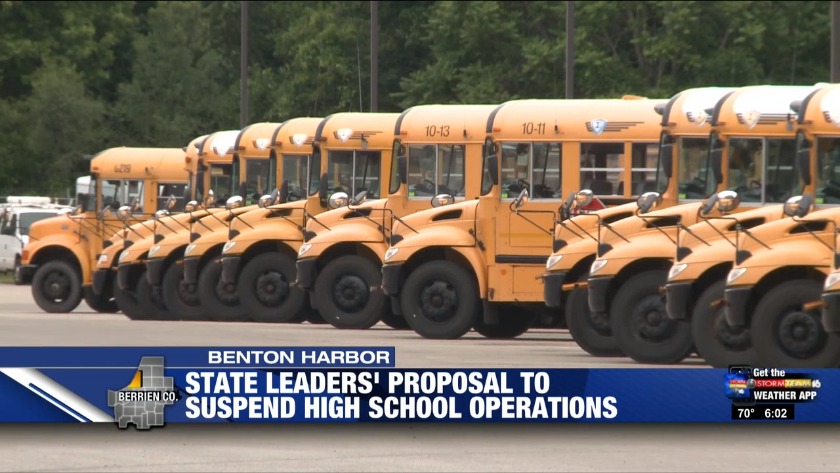 BENTON HARBOR, Mich. (WNDU) - A state plan to turn around Benton Harbor Area Schools would shut down the high school.

Starting in the fall of 2020, high school-aged students in Benton Harbor would be provided free transportation to attend one of seven nearby districts.

It is hoped that students would be able to choose rather than being assigned to high schools in Berrien Springs, Bridgman, Coloma, Eau Claire, Niles, St. Joseph and Watervliet.

A new early college charter school at Lake Michigan College and the Bridge Academy would also be options.

Benton Harbor High School now has 611 students. An alternative high school in the district with an enrollment of 94 students would be closed as well.

State officials say there is enough capacity at the neighboring high schools to accommodate the Benton Harbor transfers.

If the plan was rejected at the local level, state law dictates that either the entire district be dissolved or be converted into a charter school system.

“When we look at student achievement, we need to ensure that the students in Benton Harbor are having opportunities to improve their outcomes,” Interim Michigan State School Superintendent Sheila Alles said during an afternoon conference call with news reporters. “When we look at their MSTEP scores and their SAT scores, we see that the high school students have zero percent of success on SAT and have very low scores on MSTEP.”

“The district has seen really persistent enrollment declines, enrollment has fallen by more than half since 2004,” she said.

“In addition, they have a significant amount of debt. They have five emergency loans with the state that total about $10.8 million,” Eubanks said, adding that projections show the district will run out of cash in the spring of 2020.

The state has instructed the Benton Harbor School Board to report back in two weeks.

"Under this plan, starting in the 2020-2021 school year, high school students would be able to attend one of eight local high schools in their area or get a CTE focused education and earn college credits in partnership with Lake Michigan College," a news release from the Michigan Department of Treasury explained. Read the full text below.

"In 2018, only 3 percent of Benton Harbor Area Schools third graders could read at grade level, and zero eleventh graders were deemed college-ready each of the last five years. The district is more than $16 million in debt, with $700 per student being spent to pay back debt every year," the news release reveals.

At a special CEO meeting Friday afternoon, superintendent and CEO Dr. Robert Herrera said that it was too early to make a full comment on the matter.

"I know there's some level of frustration within our school community right now waiting through this," Herrera said. "It's certainly a shock to the community at the level of the options and how significant those changes would be to our schools and our community."

Dr. Herrera maintains that the staff's focus is on the students and preparing them for next year.

"We'll be back and we'll be in session for the next year," Herrera said. " I will be working with the students and the community surrounding us throughout the summer to make sure that we are ready for them in September."

Benton Harbor Mayor Marcus Muhammad spoke out against the proposal in a social media post Thursday.

From the Michigan Department of Treasury:

Today state of Michigan officials met with Benton Harbor education leaders to discuss a bold proposal to get Benton Harbor students on a path to success and help the district take steps toward resolving their debt.

In 2018, only 3 percent of Benton Harbor Area Schools third graders could read at grade level, and zero eleventh graders were deemed college-ready each of the last five years. The district is more than $16 million in debt, with $700 per student being spent to pay back debt every year.

To help Benton Harbor students get on a path to postsecondary education, the State of Michigan and community partners have proposed a plan to expand opportunities for Benton Harbor students from Kindergarten through Eighth grade and suspend operations at the high school and alternative high school. Under this plan, starting in the 2020-2021 school year, high school students would be able to attend one of eight local high schools in their area or get a CTE focused education and earn college credits in partnership with Lake Michigan College.

“There’s no question that this will be an adjustment for Benton Harbor families, but this is the best solution to serve students and get the district on track to resolving their debt,” said Treasurer Rachael Eubanks. “Sitting back and doing nothing is not an option. We’re proud of the solution we’ve put on the table and believe it’s a much better option than what has happened in the past, where districts have been completely dissolved or converted to a charter system. This way, we can ensure K-8 students can get the skills they need and area high schoolers can get on a path to post-secondary success. The governor is ready to work with the Departments of Treasury and Education as well as the local school board to work on this solution and put our students first.”

“Our primary concern is for the children of Benton Harbor,” said Interim State Superintendent Sheila Alles. “This proposed plan helps focus everyone’s efforts on improving academic outcomes and providing brighter futures for Benton Harbor kids. This is a critical time, and the students need the opportunity to move forward.”

The State of Michigan plan requires approval from and partnership with the school board. The plan will include transportation for high school students at no cost to families.