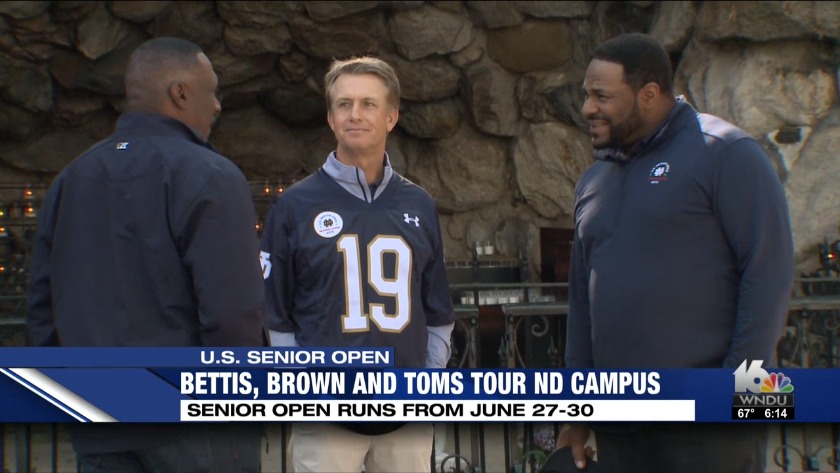 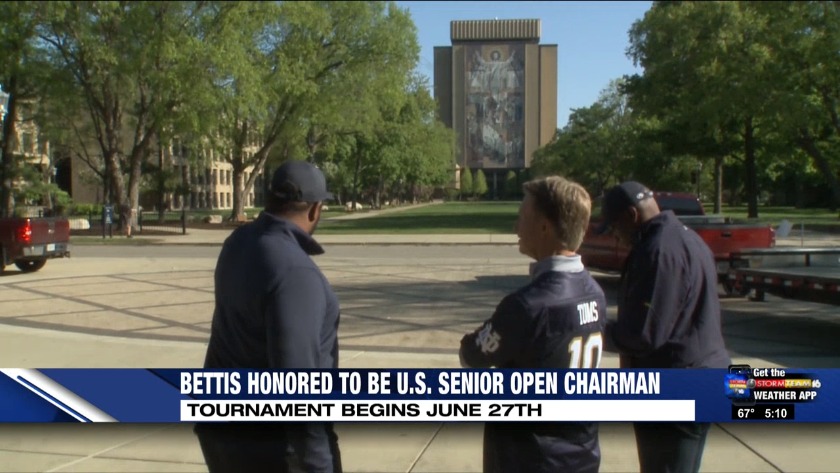 "It’s always fun to get back on campus and really try and show the campus off," Bettis said. "I think it’s a really special place. I think it really lights up."

The two former golden domers were showing it off to 2018 U.S. Senior Golf Champion David Toms. The two honorary chairmen for the tournament were able to get the former LSU Tiger to bleed blue and gold.

"You can just feel the history here and all the traditions of the place and makes me almost sad that I didn’t show up before this to see what it was all about," Toms said.

Toms even played some football on the turf at Notre Dame Stadium with the two Irish legends. Bettis and Brown say it was an honor to show Toms their old stomping grounds.

"It’s always good to show off the campus to someone who is really affiliated with his campus," Brown said. "For him to be able to see the differences and hear from two guys who had a little success when they were here, I don’t think he’ll ever forget this day. No doubt about it."

But it was also a day Bettis and Brown will never forget. The two say Notre Dame’s campus becomes even more magical when they make the trek back to South Bend.

"It becomes a ton more special when you are no longer here," Bettis said. "Obviously when you are here going through the rigors of school all you see is the work that’s in front of you so when you get the opportunity to step away from it and then come back, you get a chance to see the majesty and everything about the University that makes it such a special place."

And today’s special day is one Toms will always remember.

"Just to be able to come out and spend some time with Jerome Bettis and Tim Brown on the campus of Notre Dame inside the stadium, to hear their stories about when they played here and the way things went," Toms said. "It was a special morning for me and I can’t wait to get back for a football game soon."

Toms will be back in South Bend before any Notre Dame football takes place.

The U.S. Senior Open begins on June 27th at the Warren Golf Course where Toms hopes he can defend his crown.