PART 3: Niele Ivey discusses how her son Jaden was a factor in decision to take Memphis job 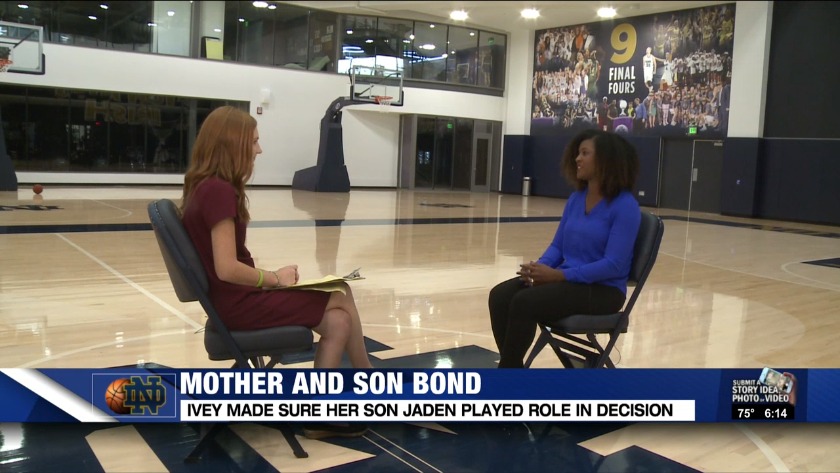 SOUTH BEND, Ind. Former Notre Dame women's basketball assistant coach Niele Ivey is on her way to Memphis to take an assistant coaching job with the Grizzlies in the NBA. But leaving South Bend and her son wasn't an easy decision.

Her son Jaden Ivey is a Purdue basketball commit and recently announced his transfer from Marian high school to La Mumiere.

Niele Ivey tells our Megan Smedley about the two's strong bond and how she wants to continue making Jaden proud.

You can watch the interview in the video above.
.
Q: What was the conversation like with your son about taking this position?

A: Well, I allowed him to really be in the decision, because I feel like he's at this point where my moves affect him. And so I wanted to make sure that we were on the same page. And I wanted him to feel a part of this decision, because everything I've done up to this point
has been for him. And I know, it's a sacrifice for both of us. But I thought that, you know, involving him in the decision process was was necessary. And he was super excited. He was I mean, I think he was in such shock, just like myself, but I he is really matured. And he just
gave me a lot of a lot of great advice. And he was he was really on board for for it. And so that part made me feel more made me feel more comfortable. But he was super excited. And and now like he's taking a different journey, and I'm taking a different journey. So it's
really exciting for both of us to to be able to step out on faith and go to different paths,but both that will lead us both to have successful career down the road.

Q: How do you want to continue making Jaden proud as you begin this new adventure?

A: I mean, I think he sees me, you know, a single parent, you know, mother that's working and working mother and the, I guess when he's been younger, he's kind of watched the way that I've worked in the way and the impact has been here with the program. And so I
want to continue that Just to show him what a strong woman looks like, In order for him to dream big as well. And so I'm hoping that just by my example of what I'm doing, I hope that continues to inspire him. So I feel like it has because he's really has taken leaps and bounds from his freshman year and just watching his growth and development as a young man. I know that that's something that he's kind of watched with even growing up watching this team, watching our girls, his first role models has been you know, Skyler [Diggins]. So a women a female, and I love that and so I hope that even now I'm being And I know a
dream of his is to you know, play continue playing playing in the NBA. So him seeing me on this level on this stage, I think it's going to inspire even more just by being around the Memphis Grizzlies.

Q: Do you guys think you could be the first mother-son coach-player duo in the NBA?

A: I don’t know. I'm just kind of taking it day by day just trying to stay in the present. But obviously that'd be an awesome dream. But yeah, I'm just going to try to stay in the moment.