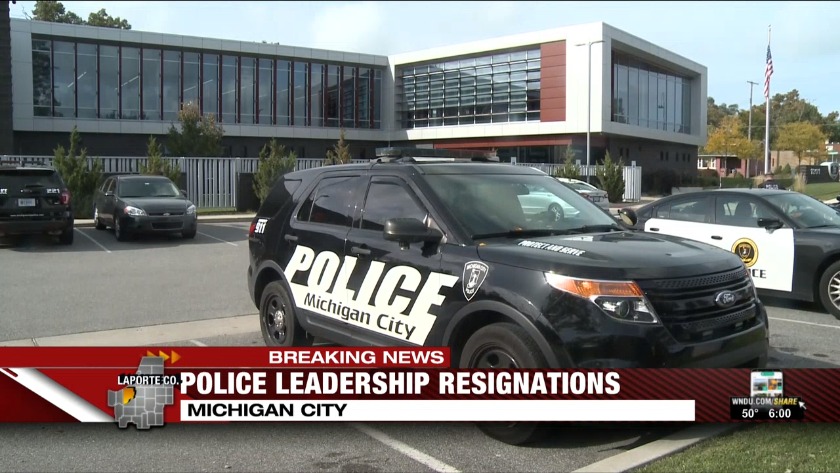 The top three Michigan City police leaders have resigned their posts after the mayor had a "private heated conversation" with the police chief.

The resignations were announced in a letter from the office of Mayor Ron Meer Thursday afternoon.

Police Chief Mark Swistek and Assistant Chiefs Royce Williams and Kevin Urbanczyk tendered their resignations in the wake of the arrest of Meer's stepson by a county task force and an apparent directive from Meer to remove the city from task force participation.

A letter of resignation dated Tuesday was posted to the Michigan City Police Department Facebook page Thursday afternoon. It appears to be officially filed and signed by Swistek and suggests Meer directed Swistek to remove the city's police force from participation in the La Porte County Drug Task Force.

"Your directive to withdraw all cooperation and participation in the La Porte County Drug Task Force and to reassign the officers who are currently attached to the task force places the Michigan City community at unacceptable risk," the resignation letter reads. "I am simply unable to reconcile my oath of office with your directive for me to withdraw our department's participation in the task force, reassign the talented and committed members of the Michigan City Police Department who are currently serving with the unit with the utmost integrity, dedication and professionalism asked of them."

The resignation letter goes on to explain that La Porte County has been designated a High Intensity Drug Trafficking Area and points out that the county "and indeed the entire nation is suffering the worst and most lethal drug epidemic in our nation's history."

"I do not know whether your decision is related to your stepson's recent arrest by the task force," the resignation continues. "But I do know that your decision is not in the interest of public safety, that it places the people of this great community in harm's way."

The mayor's office's letter addresses the conversation Meer had with Swistek, saying Meer had no intention of removing the Police Department from the county task force.

"This morning, I apologized for my choice of words to the chief during a private heated conversation, and I apologize to the members of the Michigan City Police Department," Meer says in the letter. "… I did not mean what I said to Chief Swistek, and I had no intention of reassigning any officers in the LaPorte County Drug Task Force or withdrawing the cooperation and participation of the Michigan City Police Department on said task force."

The week began with the mayor saying he felt his stepson's arrest was politically motivated. There are 11 days before the municipal election.

"I think there's been some comments from myself that are addressed in the statement that I probably could have said more professionally and in a different manner," Meer said in an interview Thursday evening. "... There's certain officers on the Michigan City Police Department, including the upper echelon of the administration that felt insulted in the situation, and so the apologies are addressed in my statement."

In the release from the mayor's office, Swistek is quoted as standing by Meer.

"I support this administration and still stand with Mayor Meer," Swistek says. "I will continue to assist with the command structure and will lead my support with the transition to the new police chief and his or her assistants."

Meer accepted the resignations, and the letter says Swistek, Williams and Urbanczyk are expected to return to their former ranks and continue working with the Police Department.

Swistek's letter of resignation concludes by listing his rank as lieutenant.

For the full letter from the mayor's office, click here.

16 News Now has a reporter in Michigan City and is working to learn more about this breaking news situation. Stay with us on the air and online as we continue to learn more.