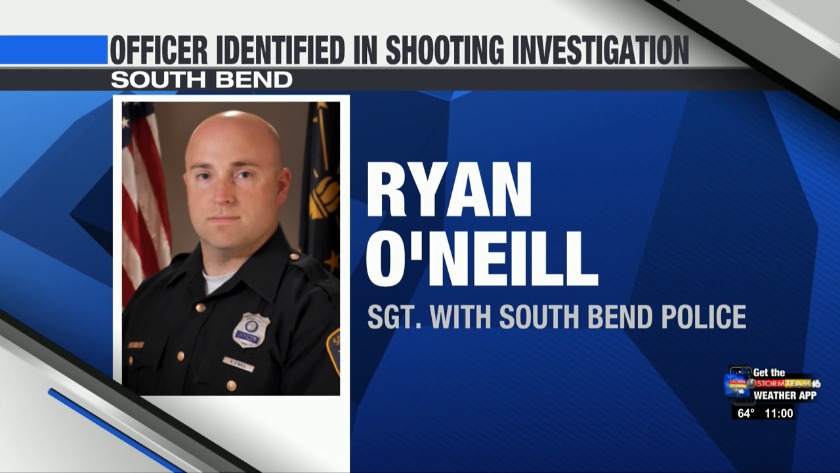 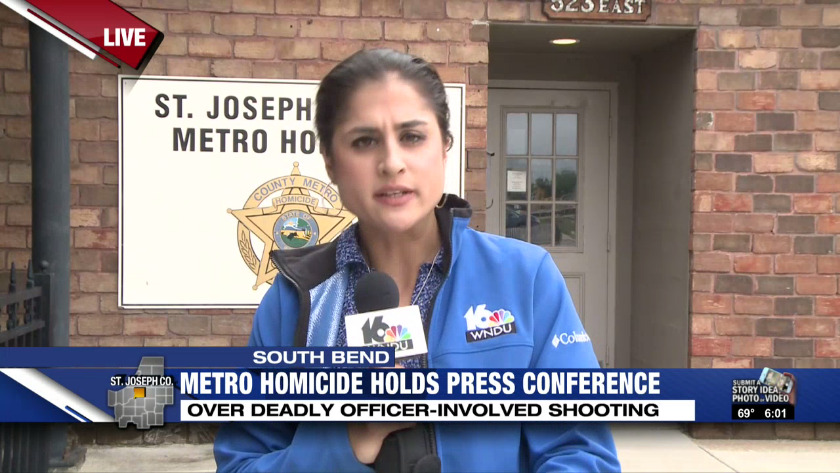 SOUTH BEND, Ind. -- The South Bend police officer who was involved in a fatal shooting Sunday morning has been identified as Sgt. Ryan O'Neill, a 19-year veteran of the department.

He has been placed on paid administrative leave.

Prosecutor Ken Cotter and County-Metro Homicide Commander Mike Grzegorek held a news conference Monday and released a timeline of events in addition to answering questions from the media.

"People have a right to know kind of what's going on with our law enforcement. Our job is to determine whether or not a crime has occurred and whether we can prove it," said Cotter.

According to Cotter, emergency dispatch received a call at 3:23 a.m. Sunday from a person who heard glass shatter and saw a person wearing dark clothing, looking into cars. Four minutes later, South Bend Police received the call, and at 3:30 a.m., Sgt. O'Neill tells dispatch he arrived at Central High Apartments.

Since O'Neill was dispatched to a 'suspicious person' call, his lights and sirens were not activated in order to avoid scaring off the individual, officials say.

O'Neill told investigators he saw person whose body was half-outside a Hondra CRV in the apartment complex parking lot. That's when he reportedly got out of his squad car and asked the person if he was the vehicle owner. The person, later identified as Eric J. Logan, responded he was the owner.

Sgt. O'Neill also noticed the man had a purse wedged in his clothing and was holding a 6-8 in.-long knife in his right hand. This is when O'Neill told investigators he retreated and told the man several times to drop the weapon.

The man allegedly refused, approaching the officer while raising the knife. Sgt. O'Neill told detectives he was nearly backed up against his squad car, roughly 7.5 feet away from the man, when he fired two gunshots. One went through the Honda CRV while the other hit Eric Logan in the abdomen.

When the shooting happened, O'Neill told police Logan remained standing. The officer said he was then cut by the knife Logan had been holding. Prosecutor Cotter said it's unclear if Logan intentionally threw the knife or if he released it due to being shot.

According to the St. Joseph County prosecutor, these events transpired in less than three minutes of O'Neill arriving at the parking lot.

At 3:33:09 a.m. Sunday, the officer announced over the radio shots were fired and that he needed an ambulance. 11 seconds later, at least five responding officers arrived to help O'Neill. An ambulance was dispatched at 3:34 a.m., but O'Neill asked an officer at the scene to take Eric Logan to the hospital, where they arrived by 3:36 a.m.

Cotter further said the knife found at the shooting was taken from a vehicle on Taylor Street. The owner of the tactical knife has identified it as his.

The purse was taken from a different vehicle and also was identified by its owner.

DNA tests and fingerprinting are still pending, since the prosecutor's office may send the stolen items to a private laboratory, since it could take months for results to come back from Indiana State Police, the entity that typically performs the tests.

In all, officials say six vehicles were broken into: two on Taylor Street, two on William Street, and two in the Central High Apartments parking lot.

Currently, the officer and the late Eric Logan remain the only shooting witnesses. At least six police officers have been interviewed in addition to the owners of the six vehicles that were broken into.

The county prosecutor reports there is no body camera footage of the shooting since O'Neill's body camera was not activated. No adjacent buildings captured video of the incident either. However, detectives have reviewed body camera video from the officers who responded to the call as back-up.

Officials refuted claims by the Logan's family that police did not notify them of the death. Prosecutor Ken Cotter reported he met with Logan's mother and sister.

Cotter added Sgt. O'Neill has been cooperative throughout the investigation.

NewsCenter 16 filed an Access to Public Records Request (APRA) on O'Neill, learning Monday he has received several letters of commendation for his work on the force. In 2015, the police department promoted O'Neill to patrol sergeant.

A 2004 investigation led to a one-day suspension for O'Neill, who struck a pole with his squad car. A 2008 internal affairs investigation was determined to be “not sustained” at its conclusion.

Stay with NewsCenter 16 as we update this story on air and online.

St. Joseph County Metro Homicide Unit is investigating the shooting, which they say happened around 3:30 a.m. near Central High Apartments.

Officers were reportedly responding to a suspicious person who was believed to be going through cars near the apartment complex. When an officer attempted to engage with the suspect, he allegedly approached the officer with a knife raised, leading the officer to fire his gun.

The suspect, Eric Jack Logan, was taken to the hospital where he was pronounced dead.

Paid administrative leave is protocol for officer-involved shootings during the investigation.