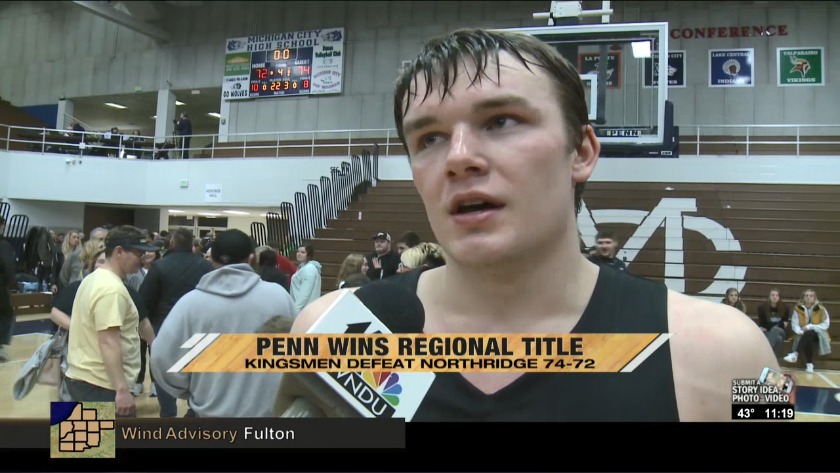 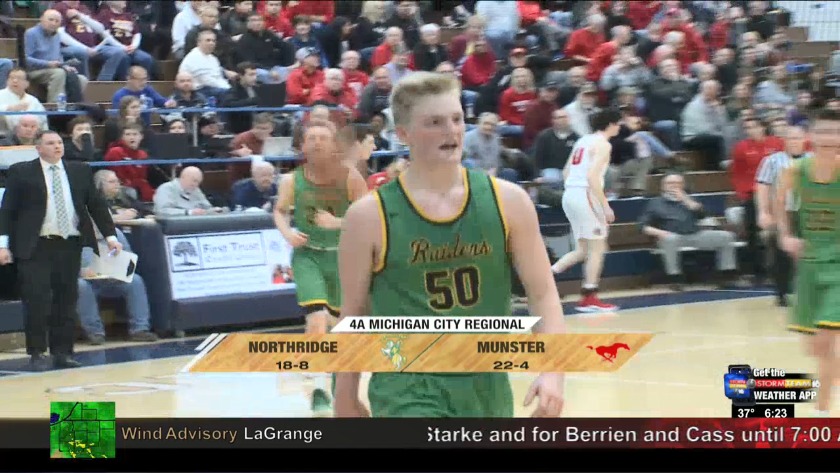 The 2019 4A Regional Final at Michigan City High School will be one that's remembered for a long time.

At a raucous gym, Penn's Drew Lutz hit a game-winning layup with just 5.7 seconds remaining to win the Kingsmen's first regional title since 2006, 74-72, over Northridge.

"I don't think it's really sank in yet, but it's really special playing with these guys," Lutz said. "We call each other family, and we just love playing the game together."

It was a finish that fit the game. The Kingsmen and the Raiders battled back and forth all night. Both teams shot exceptionally well - at the half, they combined for 14 made three-pointers, with Penn holding a slim 36-35 lead, behind 14 points from senior guard Beau Ludwick.

Northridge's Alex Stauffer hit a jumper with just seconds remaining in the third quarter to send the Raiders to the fourth with the 54-53 lead.

Stauffer and the Kingsmen's Noah Applegate traded buckets throughout the final quarter, leading to a 69-69 tie in the final minute. From there, Applegate was fouled as he made a layup in the post. He made the free throw to put Penn ahead 72-69 with under a minute remaining.

It appeared that would be the clincher, but one more time, Stauffer came through. He drilled a three-pointer from the top of the key with 14.4 seconds remaining to tie the game at 72.

It turned out, 14.4 seconds was more than enough time for Lutz to work his magic, and deliver Penn's first regional title in 13 years.

"It's very special because of all the time we have invested in our senior class and in our program," Penn coach Al Rhodes said. "These seniors have been playing - a couple of them for four years on the varsity - so to see them mature each year and for our team to play better basketball each year is something I'm very proud of."

The Kingsmen will play Carmel (24-1) in the 4A Semi-State on Saturday, March 16th at Lafayette Jefferson High School. Tip off is at 3:30pm.

Meanwhile, in 3A, Culver Military Academy advanced to Semi-State for the second-straight year, beating Hammond, 62-41, to win the regional crown.

For the defending state champs, this is just one more step towards the Eagles' ultimate goal of back-to-back blue rings.

"It was a hard-fought win and we had to battle the whole time so we're just happy to come out with the win," CMA senior guard Ethan Brittain-Watts said. "Two times feels good but we've got to get right back to work on Monday and try to go for that Semi-State. That's the mentality it's been all year - back-to-back. We won it last year but it's Step Five. Step Five we call it."

"Each step along the way, if you lose you are going home so to win this and to be able to cut down nets again is an awesome feeling for our kids," CMA coach Mark Galloway said. "I love our kids, I love our team, I love Culver. We have great fans and support."

Culver will take on Marion in 3A Semi-State on Saturday, March 16th at North Side Gym. Tip off is at 6pm.