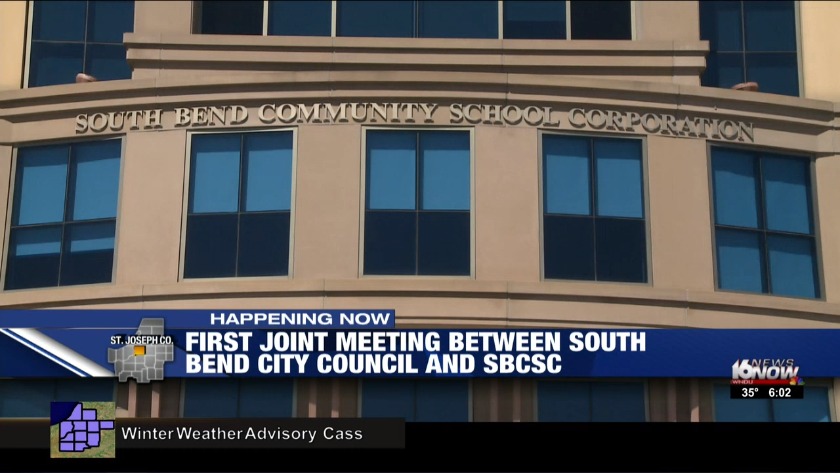 Tuesday night's meeting was the first called to encourage a meeting of the minds.

"This meeting must mark the beginning of a new way forward for our city and South Bend schools," Mayor James Mueller said.

They plan is to work together to help students live productive and successful lives.

"Just as the city of South Bend is experiencing a renewed sense of revitalization, so too are South Bend schools," Superintendent Dr. Todd Cummings said.

While the school board said it made mistakes in the past, the board members believe transformation is possible, and Mueller and council members said they will rally behind the school district and help them "turn the corner."

"It's critically important. Everyone in this community should be concerned and willing to do pretty much anything within their power to help make sure that the public school system remains stable and functioning as efficiently as possible," Common Council Member Lori Hamann said.

Some said education is more than just schooling; it is about creating conditions in schools and neighborhoods where kids want to learn.

The two boards talked about sharing amenities, creating more security for students so they feel safe and creating a joint working committee to craft goals and visions for the future.

While some teachers said they now feel a renewed sense of hope, some were not afraid to share the painful reality that is happening in the classroom.

"This year has been so emotionally taxing. My physical health has declined. Having students curse at you every day only for nothing to happen," one teacher who took the podium said.

While the school district is now working on a May voter referendum that could bring in $220 million for educational improvements, that was not the reason for Tuesday's joint meeting.

“A lot of people think this has to do with the referendum; it does not,” South Bend Common Council President Tim Scott told 16 News Now. “This has been long overdue. We really needed to sit down so we understand where their entity is, our entity is and how best serve our community, not only for the kids but for South Bend as a whole. How our students learn, become successful as they move through the school ranks and then launch careers is how really South Bend is going to go.”

In the fall of 2018, then-Mayor Pete Buttigieg proposed a community compact with the schools. Perhaps that provides some unfinished business for the two boards to consider.

“Under the old mayor there was a compact that was floating around between the city and the schools, and that died for various reasons, but I think this new council and this new mayor, we may be able to pursue some kind of formal agreement at some point,” Anella said.

"I believe the hope is that we continue to meet regularly. We readjusted our calendar for the first time so that we can make that happen," Cummings said.

It was not immediately clear when the two boards will meet next.