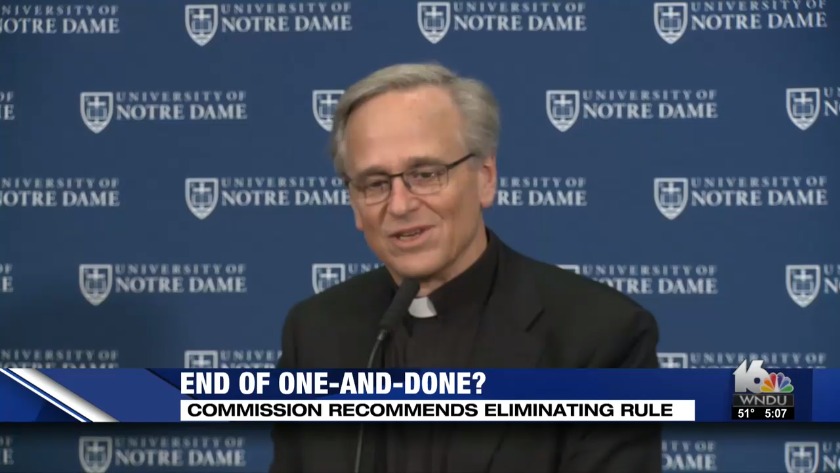 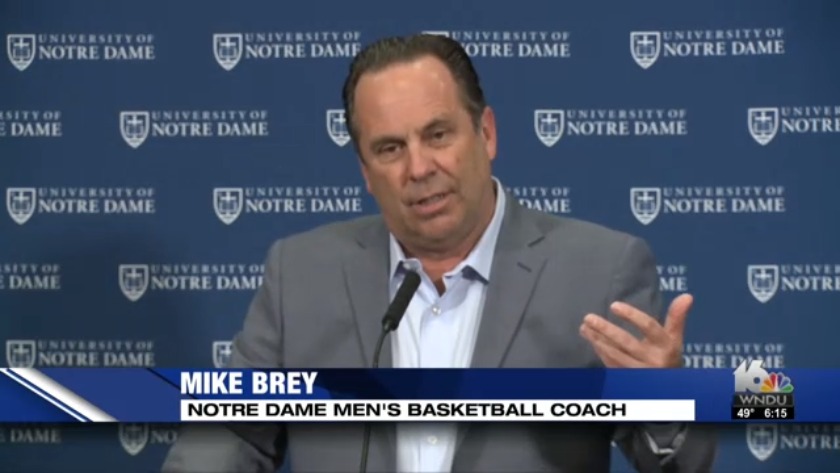 The Commission on College Basketball released their recommendations Wednesday on how to improve the game. University of Notre Dame president Fr. John Jenkins was on the panel.

This follows the FBI investigation into widespread corruption by schools, coaches, agents, and apparel companies.

The way the commission described it, the current state of college basketball is dire, but Fr. Jenkins is hopeful the changes recommended today can help fix the sport.

The biggest point they suggested was the elimination of the one-and-done rule, requiring players to be at least 19 and one year removed from high school before being eligible for the NBA.

This system has led to many of the top prospects spending a few months in college pretending to be students, but really just waiting to turn pro. That resulted in several schools paying these top prospects - some in excess of $100,000 - to enroll with them.

Notre Dame has never had a one-and-done player, and Fr. Jenkins hopes this is the end of that system.

"It undermines, it sort of gives mockery to the very idea that these kids are coming here to get a degree," Fr. Jenkins said. "In that case, the players, the families, the coaches, the universities involved all know they're not. They're just coming for a few months before going on to the NBA. That just shouldn't be the business we're in, and we shouldn't handcuff those kids and make them come if they don't want to be on a college campus and pursue a degree."

"I just think, they're such high-profile players, it was symbolic, it was a way of saying, look we're not serious about this collegiate model and we had to say yes we are," Jenkins added. "Let's make the changes we need to make and show that we're serious about it."

Ultimately though, the NCAA is powerless with the one-and-done rule, as it is an NBA rule. Only the NBA and the NBPA can change that rule, and reports are that won't happen until 2020 at the earliest.

The commission also recommended much harsher penalties, including five-year postseason bans on schools, and potential lifetime bans on coaches that cheat. Another recommendation is to allow players to return to school if they try to turn pro early but go undrafted.

One thing the panel didn't recommend - or even touch on - is paying players. While many feel the athletes deserve a chunk of the billion-dollar enterprise college sports has become, both Fr. Jenkins and Irish men's basketball coach Mike Brey disagree.

"That's an easy crutch for everyone to throw out right now, "We just should pay them'" Brey said. "You think trying to get a hold of college basketball as we're trying to, you think it's tough now, you throw that one in there, it's going to be out of control."

"Look, I think when you're talking about payment for playing, I think once we go down that road, we become a second or third tier professional league," Jenkins said. "I don't see an end to that, and I don't want Mike and I don't want the University of Notre Dame bidding on a player."

The one thing the commission did leave the door open on as far as pay was the use of player's names, images, and likeness.

That issue though is currently playing out in court, and the commission said they would wait to see how that case plays out before making any recommendations.

Michigan State opens at No. 1 in AP Top 25 preseason poll

Michigan State opens at No. 1 in AP Top 25 preseason poll