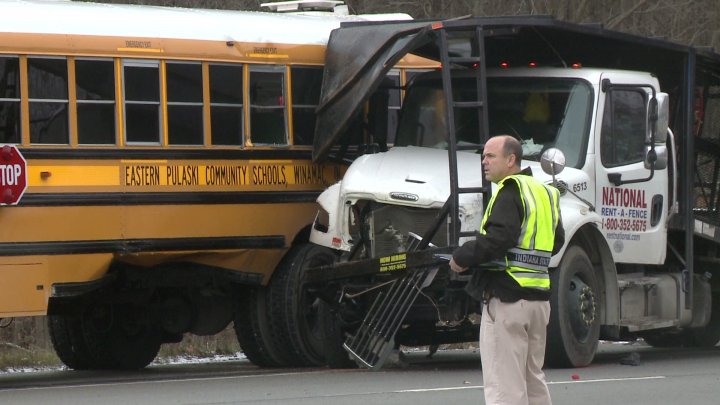 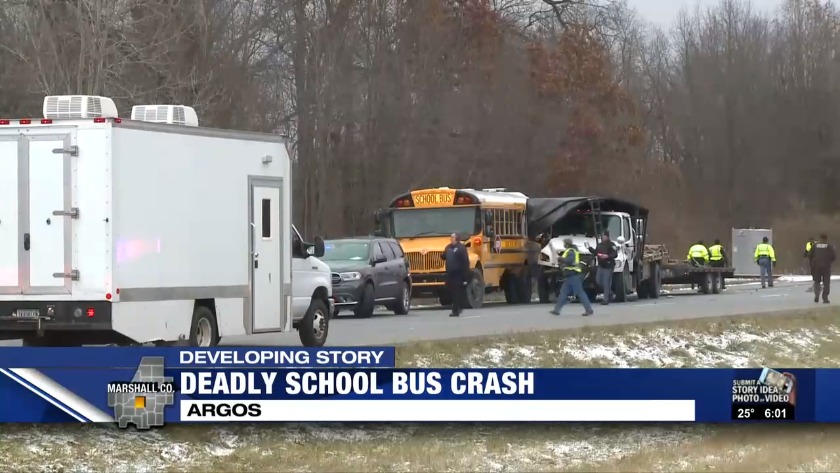 MARSHALL COUNTY, Ind. (WNDU) - One student is dead after a straight truck crashed into a school bus on its way to a field trip in Warsaw.

Wednesday night, the Marshall County Coroner's Office identified the student who was killed in the crash as 13-year-old Owen Abbott. The coroner's report lists his cause of death as "multiple blunt force trauma." An official autopsy is scheduled for Thursday.

Abbott was seated at the rear of the bus when the truck collided with it.

The crash happened shortly after 9 a.m. Wednesday on U.S. 31 in Marshall County near Argos.

The driver of the bus, 54-year-old Cheryl Warner, of Winamac, had just stopped at the railroad crossing south of Michigan Road, as required by law.

As the bus began to accelerate, it was hit from behind by a Freightliner straight truck that was towing a trailer. That truck was being driven by Tylor Perry, a 26-year-old from Camby, Indiana.

Abbott, an eighth-grader who was sitting in the left rear of the bus, died at the scene.

Another student who has been identified as 14-year-old Zayne Bell was injured and airlifted to Memorial Hospital in South Bend. His mother says he was treated for a concussion. Other students were treated for complaints of pain.

Toxicology results are pending for both drivers, which is required by law.

Weather is not believed to have been a factor at the time of the crash, according to a police report.

A total of 38 students were on the bus at the time of the crash, in addition to three chaperones and the bus driver.

The students were from Winamac Community Middle School, which is part of the Eastern Pulaski Community School Corporation. They were headed to see "Elf The Musical" at the Wagon Wheel Center for the Arts in Warsaw.

Parents were asked to reunite with their children at St. Joseph Health System's Plymouth Medical Center.

If you would like to contribute to a GoFundMe that will help offset Abbot's family's costs in the aftermath of his death, you may do so by clicking here.

Eastern Pulaski Community School Corporation released a statement Wednesday night, saying, in part, that county counselors, local pastors and other were at the school Wednesday and will be again Thursday "to meet the emotional needs of our students, staff and parents."

The school district further asked "the community to come together to pray for the families, our students and our staff during this difficult time." To read the full release from the school district, click here.

"First, my entire office extends our heartfelt sympathies to the victims and their families in this tragedy. The investigation of the school bus crash on US 31 this morning continues. The Indiana State Police is the lead investigative agency, and our office has the utmost confidence in the skills of the ISP officers involved. We are in continuous contact with them as the investigation unfolds. There are many levels in the investigation of a tragedy such as this. It will be fair and thorough, just as upon its completion our review of the facts will be. Until then, I cannot and will not speculate whether criminal charges are appropriate."

Wednesday night, the Winamac Church of the Nazarene held a prayer service to pray for everyone involved.

"There's a lot of people even though it's a small community, this will impact a lot of families," Pastor Tanner Griffin said. "That's why we were motivated to do something. It's just the touch and the reach of this will affect a lot of people."